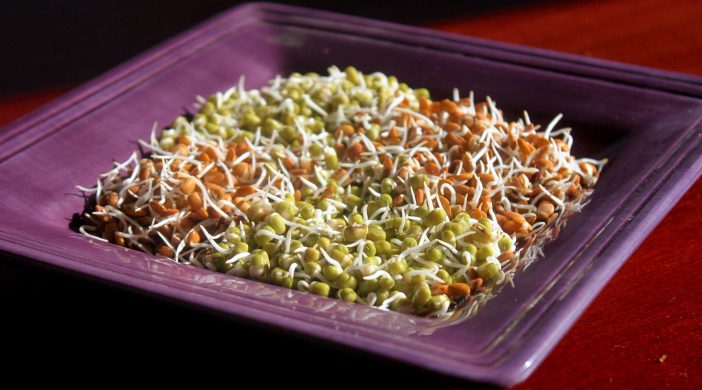 Sprouts are an excellent addition to any diet due to their high protein content and abundance of vitamins and minerals. Read on for Dr. Shivashankar’s take on this under-appreciated gem.

Sprouts have such a magical power due to their high nutritive value. Being a rich source of protein, vitamins and mineral nutrients, they are also a veritable mine of many essential phyto-nutrients which bestow on us several health benefits and protection from diseases. Eating sprouts is the best way to obtain all the nutrients without the extra calories. Sprouts made from legumes are known to contain several times higher levels of vitamins such as A, B1, B6, C and K and mineral elements such as iron , phosphorus, potassium, calcium, magnesium and manganese.

Sprouts contain about 35% protein which are easily digestible and have little fat and cholesterol that typically accompany animal meats. What’s more important is that the sprouts are also rich in enzymes, those biological catalysts which rapidly convert proteins into simpler molecules that are easily and quickly assimilated by our body. Due to this property, sprouts are best suited even for those who are weak and suffering from digestive problems.

Sprouts are strongly recommended not only for those who are obese and overweight but also young men and women conscious of maintaining their body weight. Due to their high fibre content, sprouts are the best natural agents for weight loss.

Sprouts are considered to be beneficial to diabetics and those with high cholesterol. Taking sprouts in the morning for breakfast is the best way to maintain a steady blood glucose level. Sprouts are easy to make and are highly delicious. Without doubt, sprouts make one of the best natural foods for promoting health and management of several ailments.

During the 1960s, a medical doctor who visited a village school in South India for a general health check-up reported that many children studying in primary class were undernourished. That was despite the fact that those children came from a middle class background and were fed on home-made food. The doctor’s remedy was simple. He said to the school principal “You must ensure that these children eat a handful of green gram sprouts with a dash of salt and lemon juice regularly, first thing in the morning”. The next time he returned after a year or so for his routine examination, he expressed great satisfaction and declared that most of the children were near normal. He further added that the children would be better off if they continued eating sprouts!

Make sure to add sprouts to your daily diet. It is best to consume for breakfast or lunch.