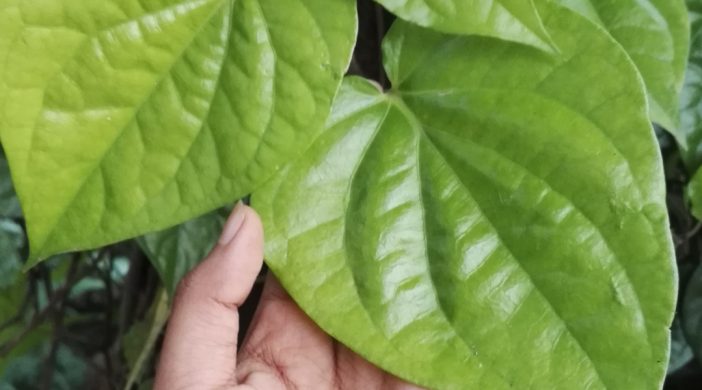 Betel leaf is a creeper found in most parts of the world with heart shaped leaves and is referred to as the ‘Golden heart of nature’. It is one of the oldest divine herbs bestowed by nature on mankind. In the cultural heritage of India, offering of betel leaves with arecanut and coconut to guests during festivals and weddings , popularly known as “Tamboola” in Kannada, is an age-old custom among Hindus symbolizing status and hospitality.

Apart from being a great source of vitamins and calcium, betel leaf is well known for its numerous health benefits. The primeval Ayurvedic texts highlight the aphrodisiac properties of betel leaf that aid in treating male and female reproductive problems. Among other medicinal benefits, betel leaf chewing is an excellent mouth freshener, good for digestion and is helpful in easing constipation. Betel leaves help in controlling blood sugar in diabetics and aid in weight loss by rapidly metabolizing the body fat and increasing body’s metabolism. This triggers blood circulation and stimulates the intestines to absorb vital minerals and nutrients. Betel leaf is also an analgesic that provides relief from pain, heals wounds and cures headache. Research studies have shown that hydroxychavicol, a component of the essential oil in betel leaf with stimulant effects has anti-platelet and anti-inflammatory properties which help in averting heart diseases. It is also known to prevent cancer, check intestinal parasites and slow down cellular degeneration. In addition, chewing paan is well known to be an excellent relaxant, stress reliever and an anti depressant.

The traditional practice of chewing betel leaves with areca nut has found mention in the pre-historic books of the Indian mythology and the most notable among them are Kalidasa’s Raghuvamsa and Vatsyayana’s Kamasutra. The practice of betel leaf chewing continues even today in various forms throughout the Indian sub-continent. In North India, a variant of this mixed with tobacco, sweetened coconut, spices, mint and paan masala known as “Paan chewing” is the preferred option. Only married adults in the family were encouraged to eat paan as it is known to increase libido. For the womenfolk, the chewing of paan served the purpose of reddening the lips in the absence of lipstick lending it a cosmetic touch.

Now,coming to the preparation of tamboola for chewing, ancient texts have prescribed certain norms which must be followed to get the best results. To begin with, betel leaves must be thoroughly cleaned and the leaf stock and the tip must be trimmed off. Recent studies have shown that betel leaf stalk impairs sperm maturation. The protruding veins on the back of the leaf which are likely to harbor insect larvae must be peeled off with the tip of a knife or finger nails lest they may lead to serious health issues in some rare instances. Then apply a bit of slaked lime paste / SuNNa on the back of the leaf and roll the leaf with some processed areca nut bits (supari) in it. This combination is called betel quid which can be directly put into the mouth for chewing. As you chew it, the very first part of the saliva in the mouth must be spit out as it is believed to contain some toxic ingredients. The second part involving complete chewing of the leaf and supari takes a few minutes when betel leaf combined with the areca nut and saliva releases its extract. When this salivary secretion is swallowed, it enters the bloodstream resulting in a stimulated feeling for the user. Finally, the residue that remains in the mouth should be also spit out as it contains waste materials.

Chewing paan is a good practice as long as it has no tobacco in it and until you avoid spitting it in the open place leaving a dirty red stain behind! Eat once or maximum twice a day after meals.  In cases, where chewing of betel quid shows health risks such as increased heart palpitations or other adverse reactions, it is preferable to consult the physician before use.

CLICK HERE FOR THE REMEDY FOR COUGH AND COLD